Endovascular (within the blood vessels) surgery is used in appropriate patients to treat strokes by improving blood flow to the brain. All procedures listed below are targeted to restore flow at the site of the blockage.

This minimally invasive procedure involves the placement of a catheter that begins at the groin and is threaded into an artery of the neck and head. During the procedure, a catheter with a balloon tip is inflated resulting in the compression of the blockage against the arterial wall, which reestablishes the flow of blood.

Intra-arterial thrombolysis is used in carefully selected patients with acute ischemic stroke caused by large cerebral (brain) vessel blockage. During the procedure, a cerebral angiogram identifies the blocked blood vessel after which the “clot buster” medication is injected into the clot. The medication breaks the clot into smaller pieces, which restores blood flow. 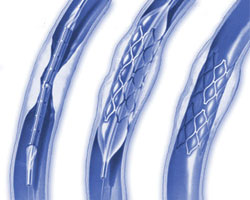 Stenting involves guiding a catheter into an artery, which carries a mesh wire called a stent. Once the stent reaches the area that is blocked, the mesh is expanded to open the narrowed artery in the neck (carotid artery) or in the brain, which restores blood flow. 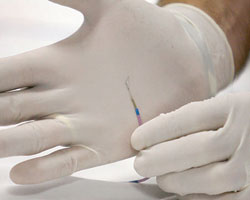 In some patients, a penumbra catheter may be used to remove a large clot. The Penumbra System breaks up the clot and suctions it out of the blood vessel. 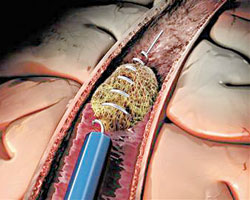 In select patients, the clot may be removed with a mechanical corkscrew device called the Merci Retriever. 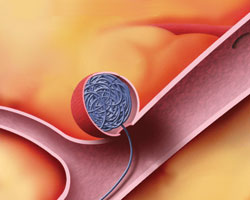 Coiling is a procedure in which a catheter is introduced through a major artery of the arm or leg. The catheter is guided up to the aneurysm (a weakened spot in the wall of the blood vessel), and a device called a coil is placed in the aneurysm to prevent it from rupturing.

Sometimes a stent needs to be used to assist in keeping the coil inside the blood aneurysm.