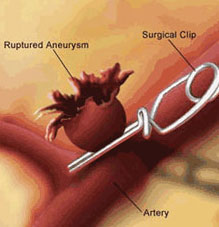 During a CEA, an incision is made in the neck at the site of blockage. The diseased portion of the blood vessel is removed and the healthy portions of the vessel are sewn back together.

An ischemic stroke craniotomy is an operation in which an incision is made through the skull to remove a blood clot.

A craniectomy may be performed when there is excessive swelling in the brain after a major stroke. In this procedure, a piece of the skull bone (bone flap) is removed to allow room for the brain to expand. The skull bone is reattached at a later date, usually after a few months.

Aneurysm clipping is a surgical procedure in which a metal clip is attached to an aneurysm to cut off its blood supply.